I’ve used both iPhone and Android phones the last decade, but the last three years I’ve been using a Samsung Galaxy S9, my very first Samsung, and I’ve been super happy with it. It still works great today, but the battery has slowly degraded so 28th of December 2020 I upgraded. Comviq my phone carrier had a great deal, so I bought a brand new Samsung Galaxy S20 5G.

A couple of days after the arrival I was sitting by my desk and the phone suddenly woke up, a meeting notification appeared on the screen but instead of showing the usual clear and bright notification a flickering black cloud covered the bottom half of the screen. I thought that was super strange, so I closed the screen so it all turned black. Then I turned on the screen again and I couldn’t see the flickering black anymore, I repeated this twice but I couldn’t get the flickering black cloud back. The software developer within me thought that was strange, but as it seemed to be a single occasion, I didn’t think about it again.

The 6th of January 2021 I went out geocaching with my daugther and while we were out suddenly the same flickering black cloud appeared but this time it didn’t seem to go away until we got home. Maybe the cold outside was speeding up the appearance of this flickering phenomenon. So after a couple of hours I went outside again, walking the dog, and the flickering appeared again. This was not a coincidence, I could reproduce the flickering behavior by going outside. I don’t think the temperature this day was extreme, if I remember correctly it was about -6 or -4 degrees Celsius.

I started searching for advice on Google and I found this article from Samsung. I followed the steps in the article, and for each step in the article I took a walk outside. The flickering was still there after each step.

I sadly realized that I would not get rid of this flickering myself, so filed a complaint and created a service request with Comviq. I think this might have been the 8th of January 2021 and the 13th of January 2021 I received the service request return package. Before I returned the phone, I thought I would record a movie of the flickering, just in case I needed to prove the flickering in a blog post or such.

This video shows the flickering before I sent the phone back the first time.

The 21st of January 2021, the phone passes all their official tests and they send it back to me.

The 23rd of January 2021, I pick up my phone and go home and I unbox it. In the box there is a description that says that they changed some components and they list those as well. 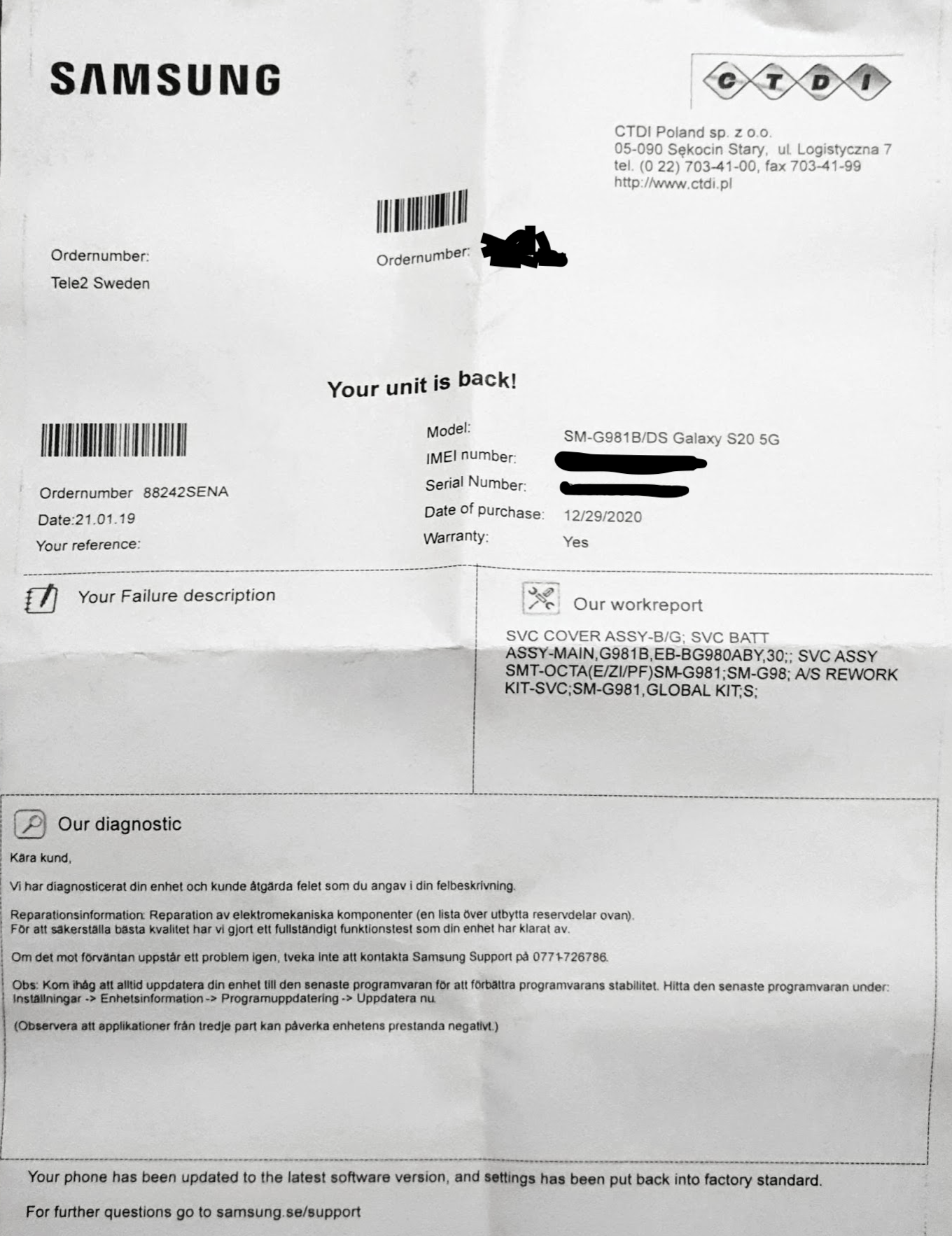 The support agent tells me I need to start another service request before I can file a complaint and get a new phone. The same day I created a new service request. 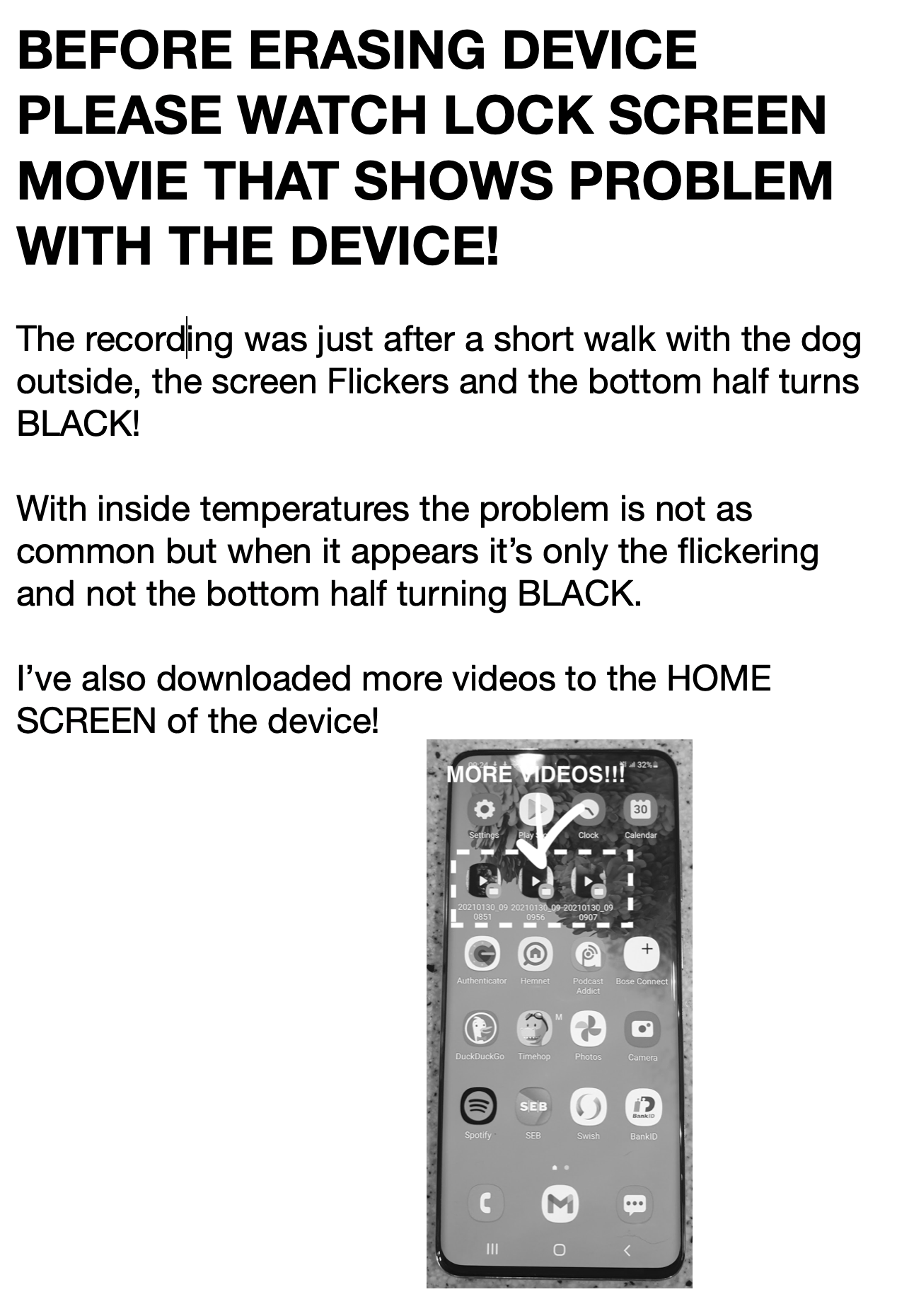 These videos show the flickering before I sent the phone back the second time.

They received my package the 2nd of February 2021 and the same day Comviq forwards my phone to an official Samsung workshop again.

The 9th of February 2021, the phone passes all their official tests and they send it back to me.

Today, the 11th of February 2021 I unbox my phone for the third time. This time the box contains the same type of letter, but this time Samsung states they couldn’t repair my phone because they couldn’t reproduce the flickering problem. 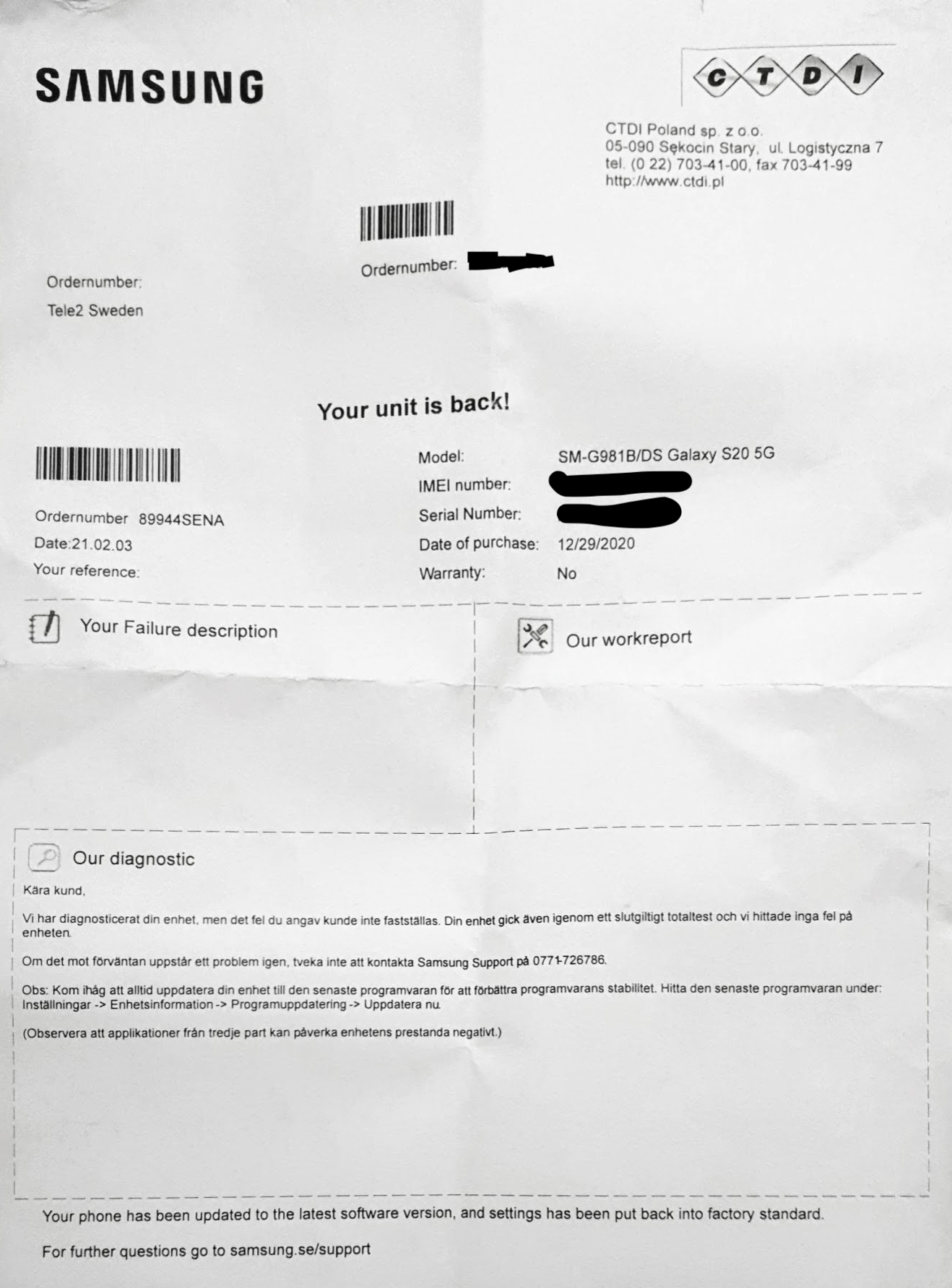 This was not what I expected, and I was very disappointed because I’ve put in a lot of extra effort in recording the flickering, adding those recordings to the Home scream, Lock screen and writing that extra letter describing all this. All this work was in vain, so this time I didn’t even bother restoring the phone. I just clicked next a couple of times on the Welcome screen, went outside with the dog, and when I got back, I made this recording.

This really sucks, and it almost seems like the flickering has become worse and after almost 2 months I’m still don’t have a working phone.